The process of selecting a two-way radio for your business can be a difficult one. You have to make important decisions about features, including digital vs. analog, form factor and durability, among many other categories.

Once you have a model or two in mind, though, there are still further steps you’ll likely want to take. When researching radio models online, buyers often come across a radio spec sheet.  Some of the figures look simple enough to understand, but to most non-technical buyers, it can be information overload! So where do you begin?

What Is the Purpose of a Spec Sheet? 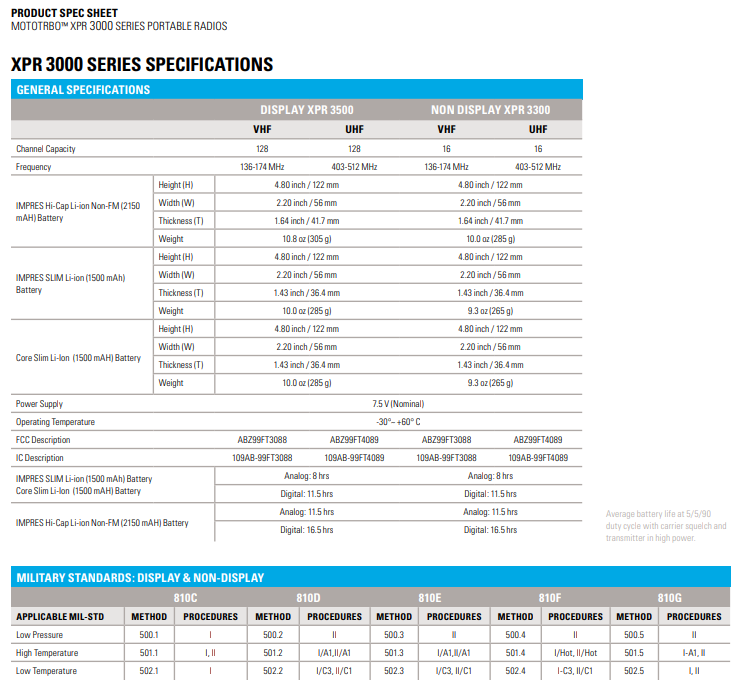 One of the purposes of a spec sheet in the technology sector is to inform interested parties about what they can expect from a given product. The manufacturer outlines the capabilities of the product for retailers and prospective customers.

If you’re considering purchasing a Motorola two-way radio, for example, you might want to know how the model that you’re looking at compares to other types. The spec sheet can help you understand in greater detail the differences and similarities that are most important for your needs.

Keep this in mind when comparing Motorola two-way radios with spec sheets from competitors, however: Motorola’s products are tested by an independent lab, while competitors may be assessed internally. As such, Motorola radios list more conservative results on their spec sheets than are likely used by other brands.

What Are Some Features Contained on a Spec Sheet for Two-Way Radios?

Spec sheets will often contain a narrative section that describes the overall features and uses of the two-way radio. In addition, you’ll find information about basic attributes like the size and weight of the device, and the number of channels. Pay careful attention to important two-way radio specs like these:

While this is a pretty simple concept, the practical benefit of power output is much harder to quantify. A 4-watt radio has twice the power output of a 2-watt radio, but you shouldn’t try to equate watts to radio range in a linear fashion. Yes, higher-powered radios should provide you with greater range in general, but since range is affected by a variety of factors — including frequency band, obstacles and terrain, and the radio’s components, which we’ll discuss below — you shouldn’t base your decision on power output alone. Also, keep in mind that higher output creates more drain on your battery.

Typically, battery life will be listed on the spec sheet according to what’s known as a 5-5-90 duty cycle. This standard term assumes that radios are usually operated during eight-hour daily shifts during which the user spends 5% of the time talking, 5% receiving transmissions and 90% on standby.

Different battery life values may be listed for digital and analog models, with digital battery life exceeding analog alternatives. Ask yourself, will the specified battery life last a full shift? Will it require spare batteries throughout the day to make it through multiple shifts? For instance, the top-of-the-line Motorola XPR7550e radio is rated with a 29-hour battery capacity.

Features related to receivers and transmitters can be real differentiators for various two-way radio models, but it may be difficult for new buyers to discern which options are best. Investigate these categories:

Some distortion will occur as signals are amplified over two-way radios. A good audio distortion rating means better overall audio quality. On a spec sheet, this is reported as a percentage, with lower values being preferred.

Different numbers may be listed for functional temperature ranges for when the two-way radios are in operation or in storage. Pay careful attention to both specs and be sure to verify whether the temperature is recorded in Fahrenheit or Celsius.

Operating conditions assessed against applicable military standards (MIL), which are authored by the U.S. Department of Defense, are often listed on spec sheets as well. If your two-way radios will be used in highly demanding, rugged environments, extra research related to MIL can help you find models that meet your requirements. Because no commercial organization certifies compliance, MIL-STD-810 figures provided by some manufacturers can be misleading, especially if independent lab testing is not used.

No single figure listed on a spec sheet should be the sole determining factor of a radio selection. It should be used as one of the tools to help you make your selection. Most importantly, you don’t have to navigate the intricacies of a spec sheet or selecting a radio on your own. Contact Day Wireless Systems for support during your two-way radio purchasing journey.