In part one of this post, we looked at some of the core challenges that arise when disparate systems are used for communication between call takers, dispatchers, first-response units and in some instances, intelligence analysts. We concluded that a set of well-integrated systems provided by one vendor and deployed on one screen for dispatchers could simplify command and control operations. Call takers can pass citizen caller information along to dispatchers, who can then deploy first-responder units based on their availability and location, all from a single pane of glass. The result: No more swivel-chair effect.

However, getting emergency-response units to where they need to be is just one part of the “call to case” lifecycle. While in the field, police officers and other first-responders need push-to-talk communication with dispatchers as well as intelligence analysts who can provide real-time, situational context for the incident. The intelligence that is gathered and shared will also eventually become evidence, which means that information needs to be transferred to records analysts to be archived for later use by detectives, crime analysts and, eventually, corrections officers. 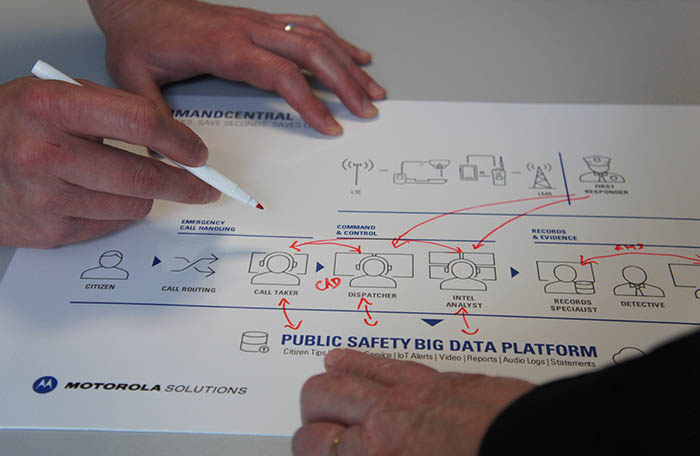 For this workflow to be highly effective, and for no critical information to fall through the cracks, the various systems involved in gathering, sharing, analyzing and storing intelligence need to be seamlessly connected. Once again, an end-to-end command center system facilitates the uninhibited flow of mission-critical data through the final phases of the crime management lifecycle.

A real-time crime center (RTCC) refers to the management of voice, video and data in such a way that the information can be used to provide live operational intelligence in the field. Crime intel can be gathered by police units as they respond to a call, for instance, via video taken from a body-worn police camera. It can also be collected from dispatcher reports, so that the location of an incident is logged in real time. Seattle, for instance, has a “real-time crime map” that’s actually viewable to the public.

Surveillance represents another source of real-time police intelligence. For example, the city of New Orleans, which hosts more than 10 million visitors each year, has deployed a comprehensive surveillance network in many of its high-traffic areas. The benefit of this system is two-fold:

For this system to work effectively and protect police units in the field, dispatchers would need to loop intelligence analysts at RTCCs into PTT talk groups. This allows intelligence analysts to communicate via radio or broadband to police units, and vice versa, to help keep officers in the field safe, and to enable them to do their jobs effectively. Officers at the scene, meanwhile, can stream live video gathered from body-worn cameras to dispatchers and intelligence analysts. This back-and-forth flow of information between the RTCC and the units at the scene ultimately improves the amount of information that law enforcement agents can work with as they attempt to safely defuse a situation.

Bringing Data to the Last Mile of Crime Management

Once first responders have done their job, they typically need to go through a tedious process of submitting evidence to records specialists who sort the information and safely stow it away. This is a time-consuming, manpower-intensive process that can be handled much more effectively if record specialists are able to seamlessly retrieve the data used in a certain incident, including PTT communications, dash-cam footage, body-worn camera footage, surveillance feeds, interviews with witnesses and other information that will be used by investigators, detectives and prosecutors. Crime analysts who report on trends and create strategies to address emerging crime patterns can also benefit from having access to this information.

If these different stakeholders – intelligence analysts, records specialists, crime analysts and detectives – operate within data silos, the transfer of this information between departments ultimately becomes an inefficient process that risks stalling productivity. The opposite is also true. We’ve already established that call-takers, dispatchers, police units and intelligence analysts can seamlessly share data during a live incident. Apply this same principle to intelligence sharing post-9-1-1 call, and the last-mile stakeholders involved in crime management can function far more effectively. Once the perpetrator is behind bars, any and all relevant information about his or her case is tied in a neat bow for corrections officers.

The common thread between the moment a citizen makes a call and a case closed, is a suite of well-integrated solutions for every aspect of crime management. Fewer disparate systems means fewer manual processes, less workflow complexity, greater productivity for all stakeholders and a better-performing agency.

Most importantly, it means safer communities.