Americans make 240 million 9-1-1 calls each year, which equates to 650,000 per day. The volume alone is staggering, but it’s augmented by the fact that most of those calls are now made via mobile. According to the National Emergency Number Association (NENA), wireless devices account for 80 percent of all 9-1-1 call traffic. While many police dispatchers can approximate the caller’s location, they’ll often need additional information from the caller so they can make sure the person is easy to find when they dispatch emergency response units.

That only skims the surface of the trouble, though. According to an extensive report from USA Today, 9-1-1 call takers are in low supply and call response times are slower than they used to be.  Many PSAPs struggle to meet NENA’s recommendation of 90% of calls answered in 10 seconds or less.

The challenge for modern emergency response is to take more calls with fewer resources and less time. Progress starts with identifying the inefficiencies that result in fewer calls taken or miscommunications and workflow complexities that occupy more of a call taker or dispatcher’s time than necessary. Because when it comes to first-responder dispatching, mere seconds can improve the outcome of an emergency.

One place to start is with a unified digital platform for 9-1-1 call takers, dispatchers, and crime analysts.  In many rural Public Safety Answering Point (PSAP) operations, one person probably wears these hats!  Call takers need to be able to swiftly relay real-time information to dispatchers, who, within clicks, can provide first-responder units with the information they need to save lives.  Crime analysts can conduct various database checks along statistical analysis and video analysis to provide first responders better situational awareness and streamline the investigation process.

As we illustrate in this two-part blog series, streamlined coordination between these stakeholders is part of a bigger, end-to-end command center sequence that’s seamlessly stitched together via a digital integrated workflow. 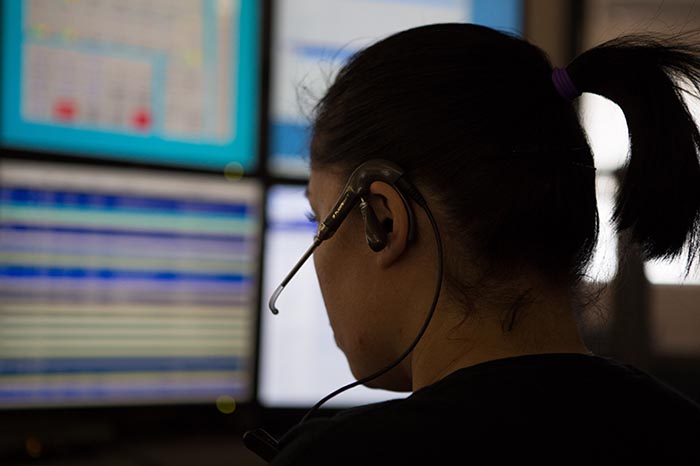 As the first point of emergency contact with citizens, 9-1-1 call takers’ priority is to gather enough information for dispatchers, who will deploy units to the site of an incident. This means call takers need effective call routing and reporting capabilities at the PSAP. New citizen touch points such as texting, Wi-Fi calling, video and other communication channels are becoming more involved in emergency-response workflows, which underscores the importance of a unified first-responder system. Before agencies can make full use of Next Generation 9-1-1 (NG-9-1-1), PSAP’s must give call takers the ability to relay critical information to dispatchers in real time (up to the second), which requires seamless integration between call taker and dispatcher systems.

Dispatchers need to see information as quickly as it’s provided by the citizen caller to the call taker. The dispatcher can then coordinate with first-responder units based on their current location. In law enforcement, police officers are tracked via GPS in two-way radios, body-worn cameras, or by vehicle. Presuming that police systems are well-integrated with the CAD system used back at the PSAP, dispatchers can use GPS-enabled devices to know who’s nearest to the incident, and who’s available to respond. Then using a radio dispatch console, they can then create talk groups to radio the assigned units with critical information back and forth, or in the case of NG-9-1-1, share video, text messages and other digital intelligence.

Modern systems allow additional intelligence from the field back to the command center via sensors including notification of shots fired, weapons drawn, crash detected, or vest pierced.  This gives the dispatcher additional situational awareness when coordinating resources.

Dispatchers may require a connection to analysts who can provide further context to units in the field; for example, an intelligence analyst might be able to pull up firearm registrations or scan nearby CCTV cameras to provide more information about the scene.

It all comes back to the dispatcher

Dispatchers are clearly at the center of this workflow. Because they’re dealing with three or more stakeholders at a time, it’s not unusual for them to sit in front of four computer screens. In extreme circumstances involving cobbled-together legacy systems, a dispatcher may have four different desktop computers, each with its own mouse, because the different systems run on their own computer or their own server. The result is a very error-prone “swivel-chair” integration involving disparate systems.

Problematically, it’s not always clear which system has failed or at what stage, since there are so many poorly integrated processes. This makes troubleshooting a nightmare – what is the source of the incompatibility between systems, where did the flow of data become restricted, which vendor should we talk to about this?

What’s more, training new dispatchers to use such complex systems effectively is incredibly time-consuming, which is incredibly inconvenient in a sector that sees so much employee turnover. Newly on-boarded personnel either get thrown to the wolves and potentially make mistakes in life-threatening situations, or agencies spend an exorbitant amount of money and energy trying to train new employees on how to use a complex combination of systems.

A Better Way: One Vendor, One System

No one benefits more from seamless integration than dispatchers; Their ability to help save lives is entirely dependent on how quickly they can receive and share information with other emergency stakeholders.

In the ideal operational circumstance, dispatchers have one computer system where they receive information from citizens. On that same computer, they have access to information about first-responder units’ locations and availability. With far fewer clicks and a lot less swiveling, they can assign and dispatch the right first responders to the right place, at the right time, with the right information.

This unified, single-vendor approach is made possible with Motorola’s Command Center Software, which consolidates 9-1-1 call taking, CAD & voice dispatch, first responder communications, and records management under one roof.  Benefits include:

In part two, we look more closely at how end-to-end command center software optimizes data and intelligence-sharing in the field to improve first-responder safety, and post-incident to eliminate data silos and make life easier for records specialists, crime analysts, detectives and corrections officers.

Previous Post: CBRS 101: What Is It and Why Should You Care?
Next Post: Emergency Responder Integrated Workflow, Part 2: Improving Intelligence During and After Incidents