On a cold, blustery day in Eastern Washington, I piled my bag into the back of a pickup truck and rode out to a demonstration of a tactical bulletproof glass that could block bullets from coming in but let bullets out from behind the glass. The claim is beyond science, a conspiracy theory to be skeptical of upon first hearing it. As we pulled into a firing range near the Columbia River, I saw a few dummies set up with armor on and a plate of glass set up so it could be shot.

As the group mulled about eating on some BBQ, the time came to see what the demos were set up for. We started first with the bullet proof vest and automobile armor. We shot multiple caliber weapons, 9mm, 40 caliber, and 45 caliber at a tactical body armor that is 70% thinner  than standard issue body armor in use today. In addition, it does not break down with exposure to the UV components in sunlight, is waterproof, and stab resistant.

One of the police captains at this demo shot at the armor at least 5 times, with the goal being to hit the same spot twice in a row from about 10 feet. You can see the marks left by the bullet, along with the remnants. Even with multiple shots within the same zone, the bullets never fully penetrated the armor, and you see the state of the bullets in these pictures. 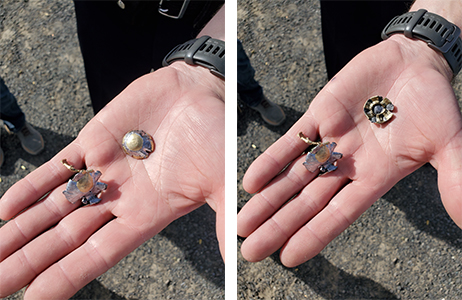 We did a quick knife demonstration and the blade never made it all the way through the armor.  Again, the same fabric that is used in a vest can be installed in a car door to provide ultra-lightweight ballistic protection.

We moved onto a unique window film that prevents windows from being smashed. It’s a thin polyester like film coating that is applied to car, home, business or any window for that matter and provides a level of security not found with any other coating. It is available in 4 different coatings and tints. We threw a pressurized can against a car window that with a normal window, would have caused a total shatter of the glass and exposed the valuables inside, including the occupants. The window held up without a scratch. This protective coating also provides protection against hammers, weapon butts, and window shattering tools.

Finally, it came time to test the window set up in the mount. The officers in attendance took turns shooting at the window with the 9mm, 40 caliber, and 45 caliber ammo. The first hit with the 9mm created a significant spiderweb effect on the windshield, intended to disperse the energy of the bullet. But the bullet did not make it through.  Same with the 40, and 45 caliber.  In fact, the larger 45 caliber round simply pancaked on the window and ricocheted (harmlessly) back toward the officer.

We then turned the window around to simulate a shot fired out from the interior.

Poof! A cloud of dust sprung up from the dirt mound behind the glass. Then another, and another. The bullets were penetrating the glass and going out at lethal speed. The glass did not destroy, deform or slow down the bullet. Watch the videos for yourself, words alone cannot do the scene justice.  It was emphasized that this ballistic protection is not to replace heavily armored tactical/SWAT vehicles like BearCats, rather to provide discreet protection to front line/high risk patrol vehicles.  “Move off of the X, and get the officer to Safety” as Peder Weierhold, one of the demonstrators at Vertrad would say.

After several rounds on a couple of different windows, we compared traditional bullet proof glass to this new glass we just tested. The traditional glass is extremely thick, upwards of 1 inch thick, and extremely heavy. Comparing this to the glass we tested today, which is just slightly thicker than conventional automobile glass, the weight savings without any reduction in safety had me sold after this demonstration. In addition, when retrofitting police and emergency vehicles with this glass, most standard police vehicles can be upfitted with limited complexity and without costly add-ons.

One of the questions asked was how this material came to be. The response was a little surprising. One day the manufacturer was testing the window, and an engineer turned it around and shot it just to see what would happen. One side let the bullet through without deformation, and the other blocked the bullet completely. Even after being shot multiple times. It was serendipity.

As we wrapped up for the day, we reviewed the use cases for these game changing technologies.

(again we are not selling it today, but there sure was a lot of interest)

Not every patrol car in your pool needs this technology, but to have peace of mind for your K-9 units, front line units, and to get to high impact, quick response situations without drawing a lot of attention, while still being fully protected makes the bold claim worth its weight in gold.

Day Wireless vehicle Upfitting Centers provide superior upgrades to law enforcement and commercial vehicles. Contact us to provide detailed consultation and installation for your use cases on these lifesaving technologies.