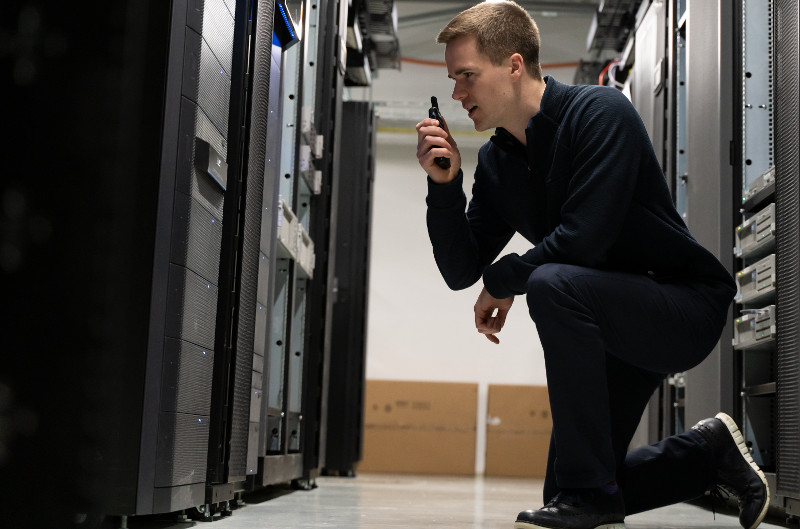 While the world waits in anticipation for 5G, the FCC has been busy finalizing standards for the commercialization of a new 3.5 GHz band that could have a much more immediate impact on wireless broadband access for businesses. It’s called the Citizens Broadband Radio Service (CBRS).

CBRS will be commercially marketed under the tradename OnGo, similar to how Wi-Fi has become the standard tradename for 802.11 wireless networks. OnGo is touting LTE like performance with Wi-Fi network simplicity for commercial entities.

Simply put, it refers to a 3550-3700 MHz band that the FCC has chosen to make available for commercial LTE use to help contend with spectrum crunch. It was previously a protected spectrum only available to the U.S. Department of Defense and widely used by the Navy. It is sometimes referred to as the “innovation band”.

The number of wireless devices (consumer and enterprise) is growing, and so is the amount of data transmitted and received by these devices. The problem is that there is a finite number of available wireless frequencies on the radio spectrum, and those frequencies are being gobbled up fast. Meanwhile, Wi-Fi has become extremely congested, and due to the high “noise” of Wi-Fi especially in urban areas, Wi-Fi performance can be limited in many ways. CBRS/OnGo helps alleviate this crunch by allocating a new band of frequencies. This effectively creates more “traffic lanes” over the airwaves for wireless devices.

Rather than simply selling off the new spectrum to mobile operators (e.g., the big four), the FCC will make CBRS commercially available to pretty much everyone. Naturally, this means non-traditional mobile operators such as Google and many cable companies have taken notice, and will likely bring new products to market for home and business broadband. The top companies in technology, including Cisco, Ericcson, Google, Intel, Nokia, Ruckus, Motorola and many others, are already racing to develop and certify devices and networks for the open spectrum. Eventually, enterprises will be able to deploy their own indoor and/or outdoor private LTE networks.

A private LTE network on the CBRS band could effectively be used in place of or in conjunction with Wi-Fi. It can also address existing cellular coverage gaps in large or spread out facilities such as commercial office parks, skyscrapers, manufacturing plants, hotels and hospitals, just to name a few examples. Based on power and propagation of currently available OnGo network access points, users can see up to four times the coverage and twice the throughput of existing Wi-Fi systems. This means that fewer nodes will be necessary to provide on-site coverage.

Wi-Fi is widely considered a non-secure, or easily hackable, platform. OnGo systems such as the MOTOTRBO Nitro platform will have restricted access based on SIM card and have configurable network topologies so IT can use best practices in cybersecurity design.

How and When Will Customers Access the New Band?

OnGo will rely on a three-tiered spectrum access system (SAS) for this 150 MHz of spectrum. Each tier is fully protected from sharing spectrum with the tier beneath it. So for example:

Deploying the CBRS spectrum (PAL or GAA) will involve implementing FCC-licensed equipment that makes it possible to wirelessly receive and transmit data through those frequencies. This is where Day Wireless Systems comes into the picture: Our job will be to help customers who want access to the spectrum obtain, install and maintain the necessary equipment. Any entity working with this equipment must have OnGo certification.

As for the timeline, the FCC expects to finalize standards sometime within 2019, and many companies such as AT&T, and Charter Communications have begun testing CBRS services that they anticipate could be rolled out before the end of the year. Motorola Solutions is actually first to market with a complete end to end solution with devices, infrastructure and network management with their MOTOTRBO Nitro platform.

This puts CBRS well ahead of 5G in terms of its rollout. Because 5G operates at a higher frequency than CBRS’s current band, its signal strength degrades much faster over distances and will be considerably more susceptible to disruption from physical barriers (natural and man made) as well as inclement weather.

More importantly, businesses that seek to leverage CBRS/OnGo systems don’t need to wait for carriers to build out infrastructure (as they would with 5G). This means that organizations can actually begin building out their own OnGo systems today.

What Does This Mean for Wireless Devices?

One of the biggest barriers to a CBRS rollout is the availability of mobile devices that are compatible with the current spectrum. The majority of the LTE devices on the market now are not designed to support the band’s new frequencies.

However, Motorola Solutions has released a PTT radio device named the SLN1000 which will be the first subscriber device in the MOTOTRBO Nitro OnGo portfolio. Samsung and Google, meanwhile, have both already pushed CBRS-enabled devices to market—the Samsung Galaxy 10 and the Google Pixel 3. It’s also worth noting that most consumer devices in use as of this writing are not 5G ready, and those that are will likely have to wait much longer than CBRS-ready devices before they can be put to use.

Expect to hear a lot more about CBRS within the next few months, as the FCC finalizes its standards. In the meantime, contact the experts at Day Wireless Systems with any and all CBRS-related questions.

Previous Post: To Gain or Not to Gain…That is the Antenna Question
Next Post: Emergency Responder Integrated Workflow, Part 1: Eliminating the ‘Swivel-Chair’ Issue for 911 Dispatchers