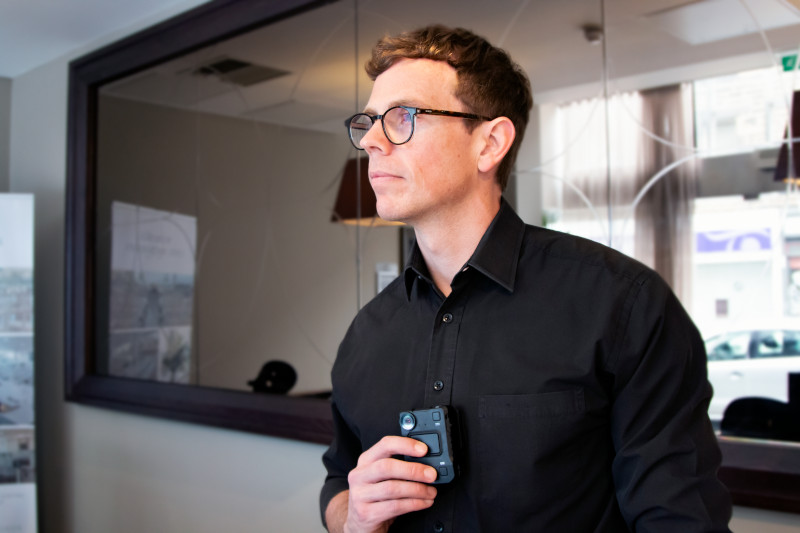 Recently, a wide variety of agencies, organizations and businesses have begun to express interest in how body-worn cameras can support their efforts. In an era of compact, portable video technology, these cameras provide an opportunity to increase transparency and improve safety in a broad array of situations.

While body-worn cameras are traditionally associated with law enforcement, we’ll primarily focus on a different set of use cases for this technology. Specifically, we’ll explore commercial applications for these devices. For retail workers and other front-line staff, body-worn cameras can make the working environment safer and more stable. Footage from body cameras can also be leveraged for training, theft prevention and other uses.

What Is the Purpose of Body-Worn Cameras?

Body-worn cameras make it easy to record video from the viewpoint of individual staff members, medical personnel, police officers and others. This improves transparency around potential conflicts by adding video evidence to the record of how events play out. These devices can be used to promote the capture of concrete evidence in situations that would otherwise be prone to subjective interpretation and potential recall errors. The ability to record video at all times or on demand can be a crucial safety feature for individuals who wear cameras as well as those who are being recorded.

A recent Seattle Times article pointed out that technology companies like Motorola Solutions have begun demonstrating the benefits of these cameras to a broader range of organizations in recent years, including retail operators.

In the commercial sector, body cameras can be used to help verify that safety protocols are followed and to monitor for potential theft. Reviewing video footage with team members can also be useful for training purposes. New hires can learn from how current employees handled real-world situations and retraining can be conducted following a specific incident.

Customer-facing retail employees could also benefit from the technology through safer interactions with the public. In the article, John Kedzierski, a senior vice president of video evidence and analytics, explained that the coronavirus has led to body-worn cameras being deployed to protect retail clerks and others.

“Front-line employees that are trying to enforce people wearing masks, or social distancing, inside the store [they] can encounter a customer that doesn’t want to do that, and those situations can get escalated. That focus on employee safety has been a key driver in our discussions more than anything else,” the Seattle Times reported Kedzierski as saying.

Video streams can be used to trigger quick security responses if needed. To preserve privacy, staff members may sometimes have to ask whether they can begin recording an interaction.

Safety and security departments at various campuses can also benefit from leveraging body-worn cameras. These campuses may include colleges and universities, as well as medical facilities and larger office parks. Security personnel may be outfitted with the devices, as could other staff members who are regularly present on the grounds.

For example, The Oxford Blue recently reported that porters and junior deans of the St. Catherine’s College campus would be equipped with body cameras to help enforce COVID-19 regulations. Previously, when attempting to disperse students, the violators refused to give their names or other identifying details. Body-worn cameras would help personnel by recording footage that could be used to later identify individuals who were seen breaking public health guidelines. The cameras would also serve as protection against aggressive student behavior, which had been an issue previously.

Body-worn cameras are perhaps best known for their use in various police departments to collect evidence and verify reports pertaining to officer conduct. In addition, other first responders, including emergency medical technicians, are beginning to employ the technology.

In the U.K., the London Ambulance Service announced that crew members in a trial program would begin to use body-worn cameras as a form of protection for medical personnel. The agency reported that 529 violent incidents had occurred between April 2020 and January 2021, noting that the cameras were intended to help deter such situations while collecting evidence in the event that a situation escalates.

Find Out How Body-Worn Cameras Can Help Protect Your Staff

Body-worn cameras help encourage open transparency in many different situations. Public-facing personnel can often benefit from the ability to record tense interactions with customers and others. During the COVID-19 pandemic, and for future situations, these devices assist front-line workers and other essential service providers as they do the necessary work to keep our communities running smoothly every day. Retail operators and other businesses can also use body-worn cameras to help promote employee training and theft prevention initiatives.

To find out how we can help you deploy body-worn cameras for your staff and crew members, contact the experts at Day Wireless Systems today.