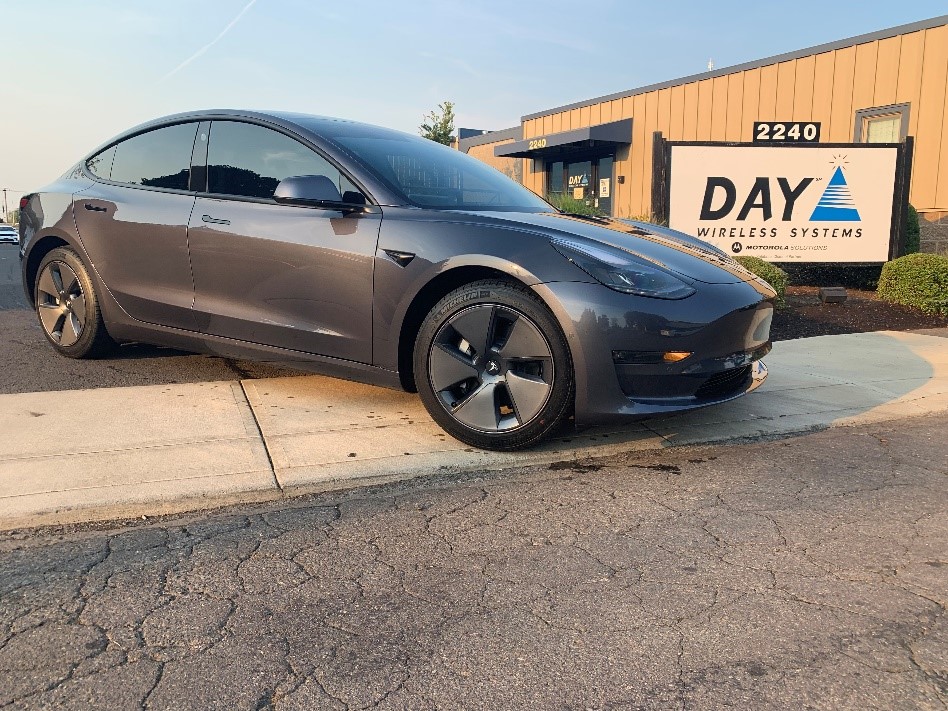 Last year,  Lake Oswego, Oregon Police Department Detective Jonithan Funkhouser received his new unmarked Tesla Model 3 work vehicle, which had been upfitted by Day Wireless Systems (DWS) to feature a Motorola APX radio in the center console, along with discreet police lighting.  This was the first Tesla vehicle upfit completed by DWS, and from the sounds of it, will be the first of many as the automotive industry moves towards EV.

The City of Lake Oswego (OR) had requested their divisions and departments to start exploring the move to electric vehicles over the next few years. In some departments that request is pretty straightforward, but for law enforcement, it can be more complicated. Detective vehicles seemed like a good place to start, and because it’s Lake Oswego—an affluent area in the Portland suburbs—the Tesla fits in perfectly as an unmarked vehicle.

Because upfitting Tesla’s is a unique process (the first we know of in the area), Funkhouser wasn’t sure how it would turn out, but when we caught up with him recently to check on the progress, he reported it has been better than expected. The radio and lights upfitted by DWS are well hidden, which has greatly aided in its utility as an unmarked vehicle.

The biggest thing I notice is the gas savings. On average when I am charging my vehicle I’m calculating it to cost around $4 in electricity, whereas my gas vehicle would be $90 – 100 to fill up in today’s prices.

Have there been any challenges you can think of?

One challenge to think about is the vehicle is very low, so wearing a full gear uniform is a bit uncomfortable, you wouldn’t want to do a full shift (while in uniform) in this vehicle.

Another challenge I’ve encountered is when I use the vehicle at night.  The headlights and taillights turn off one minute after being put in park.  (One minute is the longest option Tesla offers)  On traffic stops, the vehicle is very dark with just the red and blues flashing.

*Tesla made the “headlights after exit” feature adjustable to one minute in a 2020 update.  Perhaps we should tweet Elon to make them adjustable to a longer timeframe. 😊 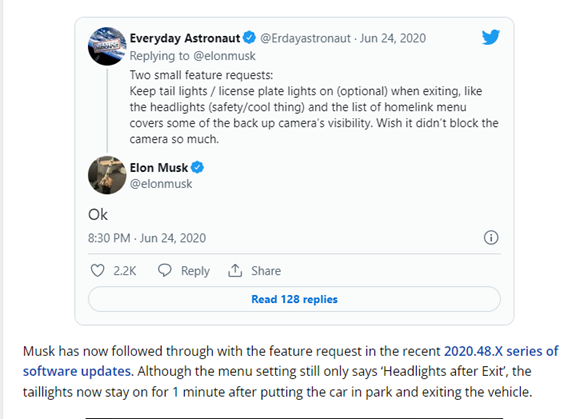 Are there any challenges as a take home vehicle to separate costs for work and home charging?

The department helped me install a (ChargePoint 50) EV charger at my home, plus the power company had a $500 rebate at the time, so the cost was pretty minimal. And I find I rarely charge the vehicle at home anyway, I charge it at work. In fact, when doing my expenses, I just need to submit an annual expense for electricity because I only need to do it a handful of times a year. And the cost, of course, is relatively low, anyway.

Has there been any range anxiety, especially with the extra electronics?

No, it hasn’t been an issue at all. I rarely even think about it. Even with the electronics I haven’t noticed it is losing charge any faster.

Have there been any unexpected benefits since you’ve been using the vehicle?

The dash cam that comes standard with the vehicle has actually been pretty useful. I’ve already caught a couple of hit and runs on video and was able to share that with neighboring departments.

Do you think your agency will be adding more EVs to the fleet?

Yeah, based on the success of this rollout, and increasing gas prices, the department has indicated they will be doing more with EVs.

I don’t think it would be practical in the near future to transition patrol vehicles to EVs as the City’s infrastructure does not currently exist to support enough charging in order to have that many patrol vehicles out there. It’s not (currently) even being looked at by Lake Oswego. But for detective vehicles, it makes a lot of sense and has been a good experience overall for me.

Thanks to Detective Funkhouser for updating us on the case of his police Tesla. We can also report the recent completion of a Tesla patrol vehicle for Monmouth, Oregon Police Department, one that should also be an excellent addition to their fleet. 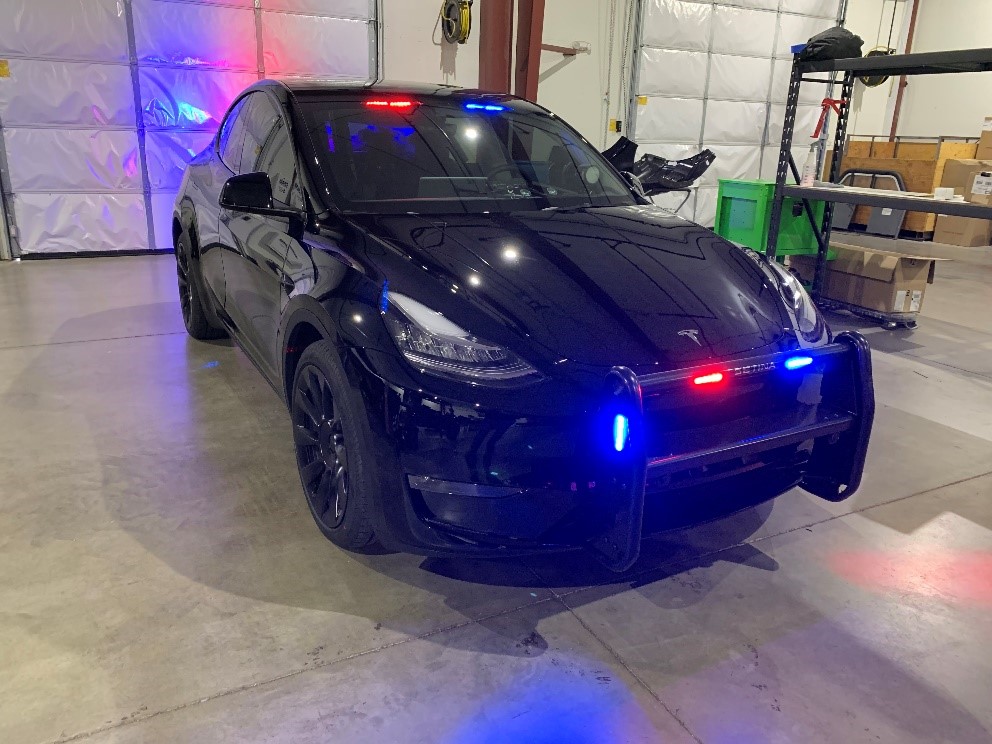 The Future is EV

While it might not seem apparent if you don’t happen to follow automotive production plans, automakers are on the cusp of making product lines of pure BEVs (Battery Electric Vehicles, as opposed to current electric-gas hybrids) with many currently in production and expected by the end of this year. Although hybrids have been successfully in the mix for years, the cost savings in fuel is so dramatic (as shown by our Lake Oswego Tesla), BEVs are the next logical step, even if their lack of combustion wasn’t also beneficial for the environment.

As this look at every electric vehicle that’s expected in the next five years from Car and Driver shows, there are many potential fleet vehicles in the mix, especially for police patrol cruisers. Anticipated offerings from Ford, Dodge, Chevrolet, and Buick have strong potential, as well as new companies such as California’s Canoo and the intriguing crossover SUV Fisker Ocean, anticipated at the end of 2022 and available with solar panels on the roof. (Fisker is already offering fleet sales.) Most new offerings range from $39,000 – 70,000, depending on equipment and trim levels.

In addition to Tesla, a multitude of price-conscious BEV fleet options are just around the corner, with plenty more to come.

Tesla and Nissan have begun the work to deploy a global infrastructure of charging stations, including Tesla’s pioneering onboard app which correlates remaining power with the closest of its 30,000 global Superchargers, and Nissan’s still expanding public fast charging network. Companies like ChargePoint are also dedicated to increasing the EV network with their comprehensive charging options for businesses, fleets, and individuals (like Detective Funkhouser).

Plans from a multitude of EV companies forecast an inevitable expansion of the EV power grid. Self-driving car business models like those planned by Uber in partnership with Volvo, Ford and VW-backed Argo AI, GM’s Cruise, and Amazon-acquired startup Zoox assure an ample charging network is in the mix for urban areas, with nationwide and global travel in progress as well.

Get a Jump on the Case (for EV)

While personal adoption might be a tad slower (especially outside the western and north eastern US) the case for fleet BEVs, particularly for government use, is apparent. The ROI for making local, municipal infrastructure will quickly shadow projected fuel spending, and the planned infrastructure will be more practical, inexpensive to use, and widely available than any other form of vehicle fuel.

While BEVs themselves work their way into fleet availability, here’s how to get started:

We’re still a few paces away from Jetsons flying cars, but EVs are finally here. Organizations like City of Lake Oswego and Monmouth, Oregon are actively working toward the benefits fleet BEVs provide their cities and law enforcement operations.

Contact our vehicle upfit team to start the discussion on adding EVs to your fleet.

Contact our Electrical Division for information about adding electrical vehicle charging stations to your facility.