In some jobs, the reward outweighs the risk. Working as a Tower Technician is one of them.

We interviewed Day Wireless System’s own Lane Falkner, who talks about going from a “green climber” to executive, and most recently the executive position of VP of Towers, Systems, and Construction. 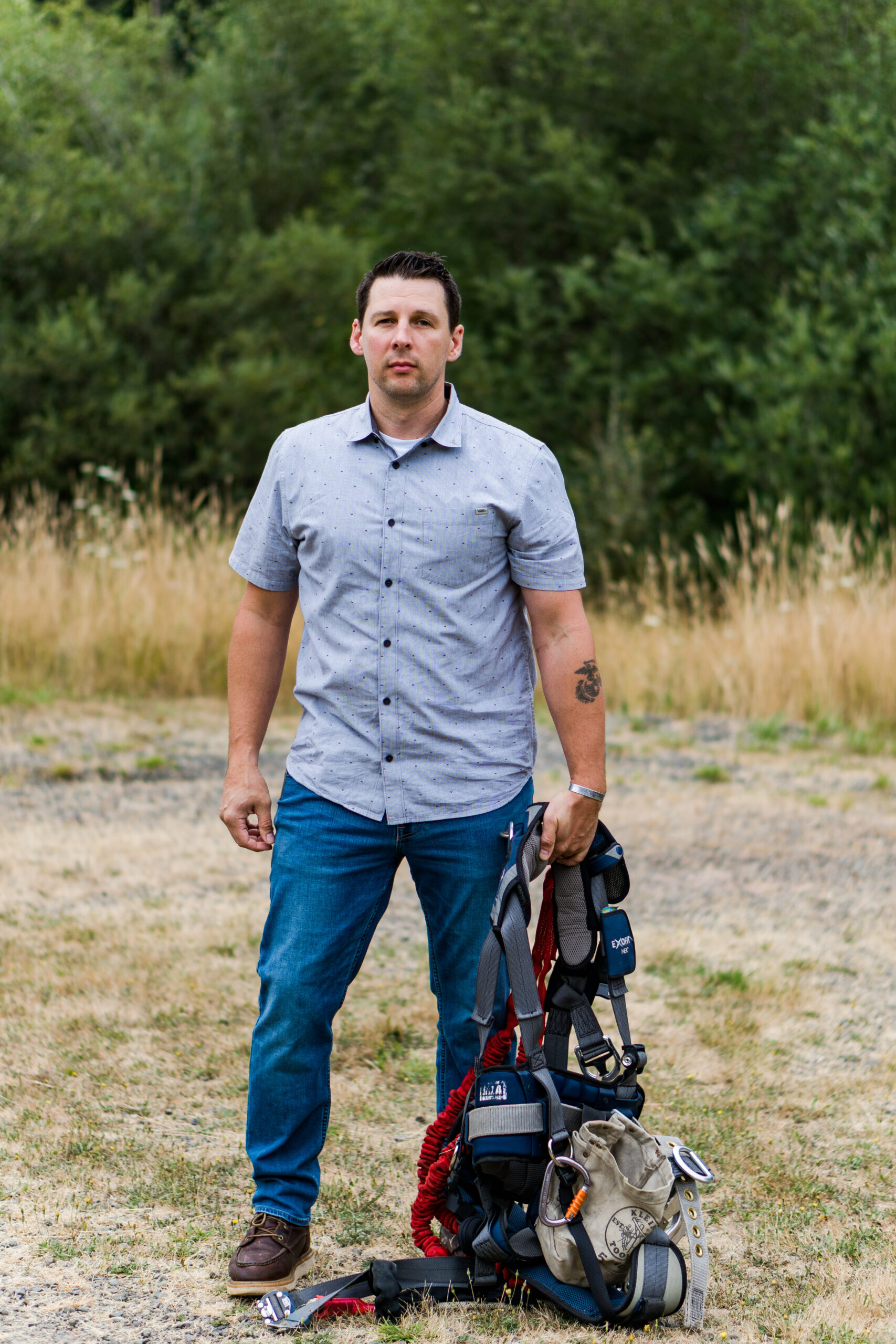 When Lane Falkner joined Day Wireless Systems (DWS) in 2007, our country was headed into a recession, a tough time to find work, let alone have a career change. Having a background in the Marine Corps as an encrypted communication systems specialist, he thought reenlisting into a new Military Occupational Specialty would bring stability. Since he and his wife then had an infant son, stability was valuable, and his wife hoped he would consider getting work closer to home rather than re-enlisting and facing overseas deployment. Instead, he took a position as a Tower Climber that would change the trajectory of his life.

DWS provided a job both similar and unlike any Falkner had before. Elements of his military training and missions, as well as pursuits from downhill mountain biking, Division I soccer, and even motorcycle repair gave him a skill set and aptitude that made him a good fit for his initial position as a Tower Climber for the Tower Construction department, and subsequent positions as Sites Specialist for Sites and Systems, then Systems Manager. It was his attitude, however, that made him a great fit for Day’s culture, and eventually led him into management of Sites and Systems. Most recently, he was appointed to a new position created for his specific leadership, VP of Towers, Systems, and Construction.

While it’s all important to him, Tower Construction was the beginning and Falker’s first friendships were formed there. “Most of us ‘grew up here’ together. My son Ethan was 7 months old when I started; I remember my colleague Kevin getting Ethan a truck from Coastal for Christmas to help us out that year,” he recollects. “My wife Natalie called me April 5th, 2009 as we were tailgating at the Klamath Falls Airport after a tower stack to tell me we were expecting our second child, my friends were there for that.”

When asked, Falkner says it wasn’t just one thing, but a lot of factors that pushed his growth at DWS. He believes in the power of the team, first and foremost, and recognizes to be successful, everyone needs to contribute where there is need. He is always thinking about taking challenges or burdens and turning them into a problem to solve and a responsibility. “The DWS way is to do the right thing, to see something through, which is something I’ve enjoyed. Leaders like Dean Ballew set up scenarios so I can make things happen and get things done while giving me room to grow.” He credits this environment for enabling his “relentless learning,” another key factor that set him up for success. “I am excited about serving the company with the perspective from a green climber to executive.” 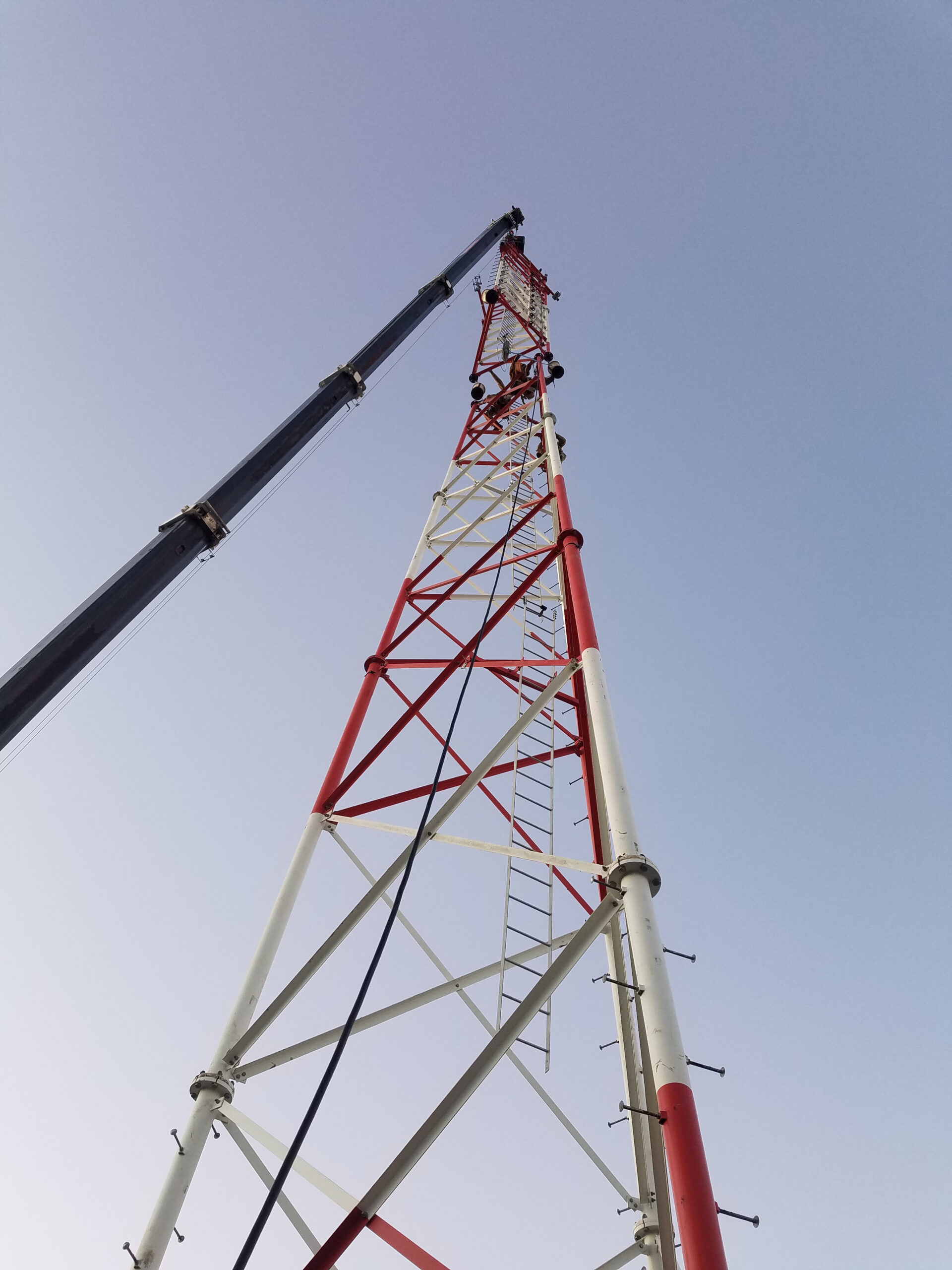 Ascending giant metal structures on the peaks of mountains and tops of buildings is not easy or without risk. For the adventurous, it’s similar to a day in any mountain sport, out in nature, getting a little adrenaline buzz while helping a local community keep their emergency 911 services online.

Not only do communications towers help facilitate signals for public radio, fire, police, and emergency systems, they often carry signals from wireless carriers and other public and private systems. Atop these towers are lighting systems designed to prevent collision with lower-flying aircraft, and when the lights burn out, pilots, passengers, and the surrounding public are in danger.

For ex-military like Falkner, climbing towers is part of a career that feels familiar… controlled risk for a big reward.

“After my first month at Day Wireless, we had a lightbulb change at 500 feet, and we couldn’t see the top of the tower because of clouds,” he recounts. “I didn’t think to have fear because I was new and it was my job. Someone had to do it.”

In another instance, after a storm in Tillamook at  Cape Meares, the Tower Technician team got a call around 3-4 pm that winds knocked out E911 services in the area. With multiple teams gathering from all over the northwest, they went home for an hour to grab more gear, got to the hotel around 3am, grabbed “maybe an hour of sleep, if we were lucky,” before heading out to replace microwave equipment, putting back the pieces that storms ripped off towers. “At one point, I remember sitting behind a microwave dish, hanging on against the wind while using calibration equipment to align the dishes,” says Falkner. “But when we see the results, and the E911 director says ‘good job guys, we’re back online,’ it’s the best feeling and from the beginning it inspired a driving interest and passion for the work.”

Climbing towers is the main focus, but just getting there can be an adventure itself, including snow catting, snowmobiling, snow shoeing, helicoptering, hiking, climbing, riding quads, winching trucks, and pulling things out of the mud. Falkner describes the job as “mission-focused,” and at times “the most fun you’ll ever get paid for.” He says driven people thrive on the opportunities and challenges it brings. 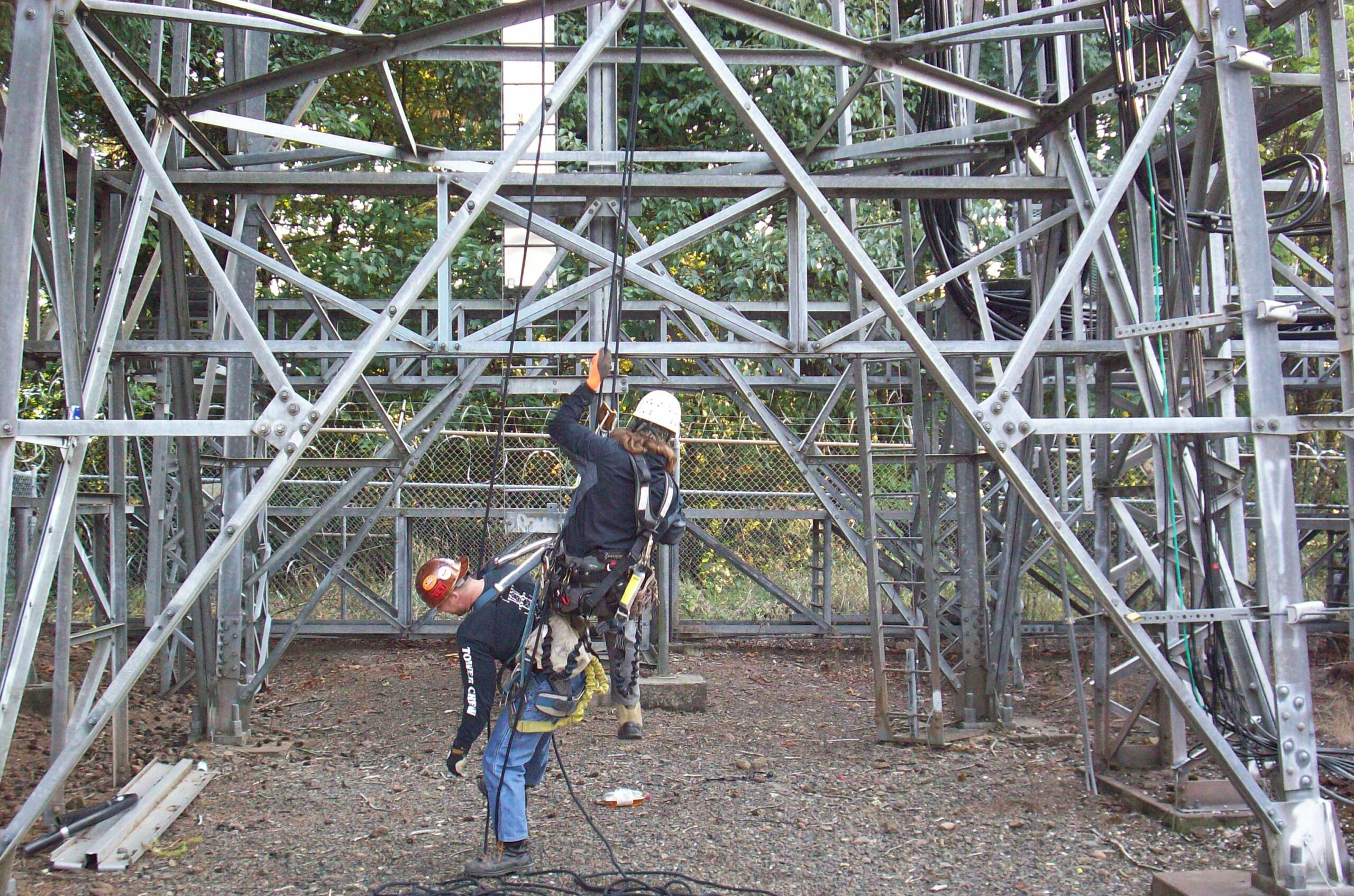 At DWS, safety is always first. Tower climbing as a national industry is one of the most dangerous jobs, which is why a rigorous training of safety guidelines and protocols is provided for all tower employees. A key guidance of looking out for each other plays an important role for everyone working in Towers. Tower techs working at DWS actually get certified by going through our ComTrain safety training to include fall arrest, fall restraint, rigging, first responder, and tower/rope rescue.

“If someone is doing something risky or dangerous, the team is on alert to fix it. Fix any mistakes right when they are seen. No one will care about your safety more than yourself, but we are a team and as a team we take care of each other and keep each other safe,” says Falkner.

Aside from having each other’s backs, the primary safety failsafe is the Climber. If they don’t feel safe, they don’t climb. Secondarily, if the tower supervisor doesn’t feel the job is safe, they might also ground the team or climber until conditions improve. Having that autonomy to make the final decision keeps our people safe.

DWS has an exceptional safety record and the desire to maintain it runs all the way to the top, with President Gordon Day providing constant safety reminders at employee meetings, and now VP of Towers, Systems, and Construction, Lane Falkner, having started out as a Climber and experienced safety issues from all sides of the tower, to now move into guiding the shape of safety and how all the teams mesh.

Who Is An Ideal Tower Climber?

Falkner says the person who is ideal for this job as well as the corporate culture at DWS is a person who is driven, assertive, has grit, works well with a team and strives to create team camaraderie. They also enjoy figuring things out and making things with minimal direction. Climbers may be more interested in a trade career vs a college track, and construction may be a good background or interest, but perhaps they want something a little more adventurous.

Successful Tower Climbers need a willingness to do whatever is required (within safety parameters, of course) and thrive under responsibility. Like Falkner, they might be athletes, love the outdoors, be rock climbers, downhill bikers, and as they work primarily in remote outdoor locations, being an outdoor enthusiast is a bonus.

Current National Guard members or former military generally find this profession to be a natural fit as it tends to benefit from a similar aptitude for discipline, dedication, remote missions, accountability, constant learning, and teamwork. As there is no post-military career track for most veterans, jobs like this one can help fill that gap by utilizing a lot of military skills. The military has been offering Tower Climbing certifications through a variety of programs, but although it might be helpful, we do all of our training and certifications in-house.

Travel is also a requirement for the job. Towers are often located in remote or forested locations, and climbers are frequently out in the field . 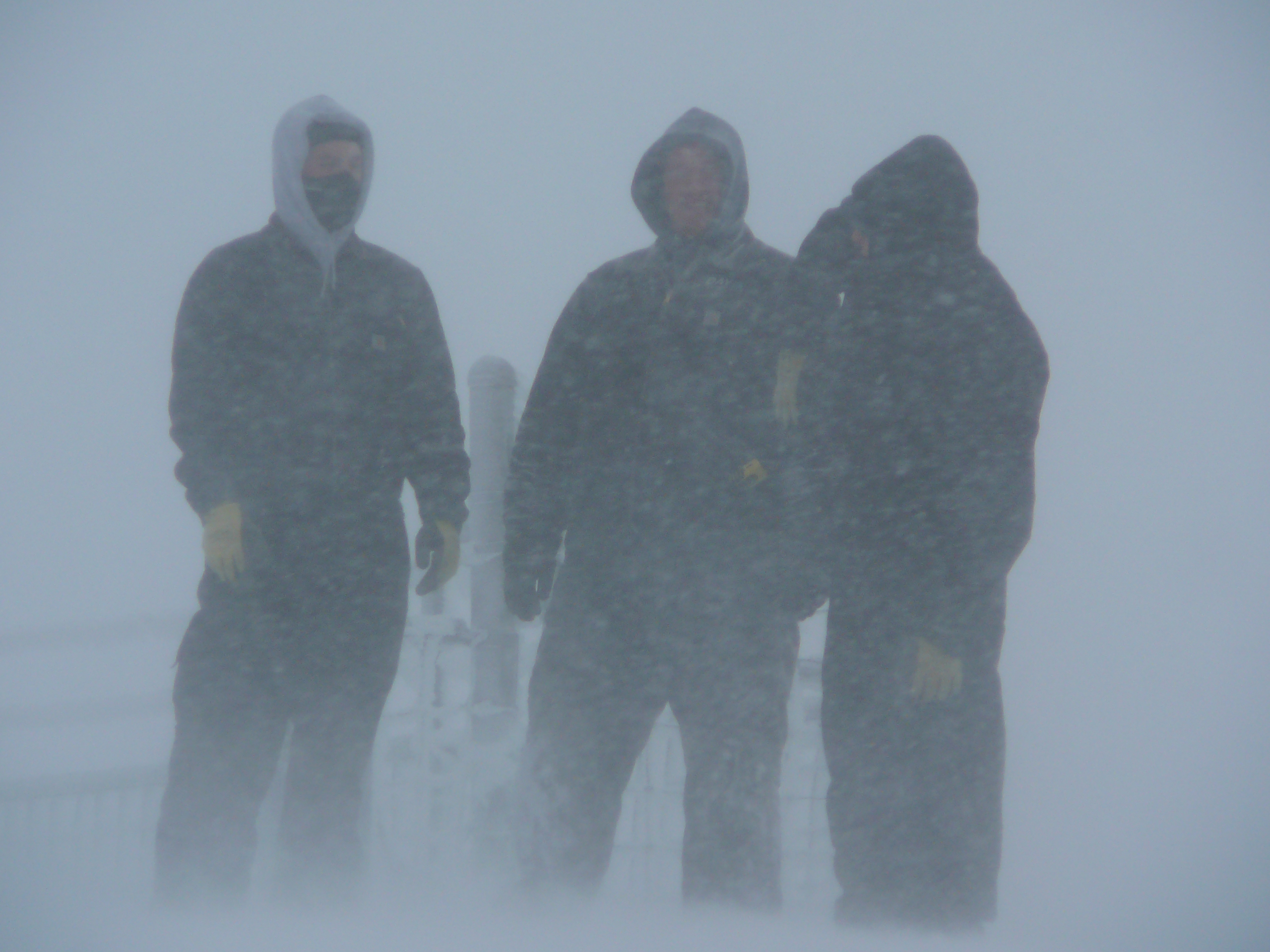 Although some climb towers for the majority of their career, the average Tower Climber works in the position for 5 – 10 years. One of the reasons for change is the opportunity for growth at DWS. Like Falkner, many other Tower Techs have moved into other roles, such as Crew Lead, Manager or Director of Construction, Service and Maintenance positions (including taking care of tower HVAC), and Systems (helping build a carrier network, for example). Many staff have stayed in the company for 15 – 20 years or more.

Working as a team, DWS employees share both personal and professional milestones, developing friendships while working as a collective unit. Lots of activities and divisions are mingled and require collaboration; the upside is opportunities for learning and developing relationships throughout the organization. The goal is not only to put the customer first (behind safety!) but also provide as many solutions as possible, including tower design, construction, networking, two-way radios, and more.

The opportunities for DWS employees include a wide variety of skills, jobs, training, and advancement. And as for potential, Lane Fakner says, “I believe we get in life what we accept of ourselves.”

DWS is currently looking for Tower Technicians. If this opportunity sounds interesting, view our Job Opportunities or contact us and let us know you are interested in being a Tower Climber and provide a short background about yourself.

One thought on “Climb a Tower”